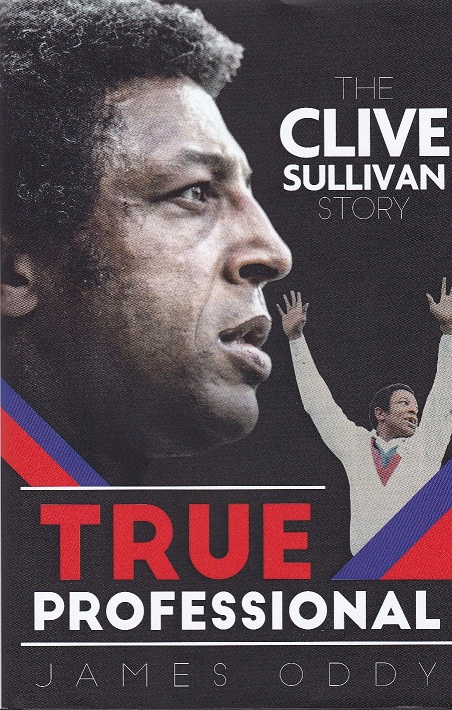 True Professional is a biography of Clive Sullivan written by James Oddy. The book chronicles the story of one of rugby leagues greatest ever players and a true Hull sporting hero.

If you’re travelling to Hull from the west and have just left the M62 you will find yourself on the A63. It’s a direct route into the city. Depending on the time of day you are liable to find yourself stuck in non-moving traffic with not a lot to look at. To pass the time you could have a peek out of the driver side window and look at the Humber Bridge. Or you could look at the road itself. There’s something special about it.

As the A63 reaches Hull it becomes Clive Sullivan Way. The road is named after one of Hull’s most famous sporting sons. Clive Sullivan (Sully) is a legend of rugby league and played for both Hull FC and Hull Kingston Rovers.

James Oddy has celebrated Sully’s amazing sporting life in this biography. Appropriately entitled True Professional the book looks at Clive’s career. A career which, sadly, many outside of East Yorkshire and the rugby league fraternity are unlikely to be familiar with.

Clive died at the tragically early age of 42. Yet he achieved so much:

The book begins with a look back at the 1972 World Cup in France. The last time Great Britain won the trophy. Clive Sullivan was the captain becoming the first black sportsman to lead a British team to international success. It’s an enjoyable retelling of the matches against the Aussies and needless to say Sully was the star of the show. His try in the final game sending GB on their way to glory.

As a youngster I do remember watching Clive’s sensational try on telly. Check it out below:

Unfortunately the hard fought victory over the Aussies hardly registered with the great British public. The author talks eloquently about the lack of recognition given to Clive and his teammates. He makes a very valid point about the World Cup win and the lack of media coverage being a microcosm of Clive’s career. He often performed heroics which deserved a much wider audience.

And although rugby league seldom makes the back pages even now you can only imagine how big a star and a media darling Clive would be if he was playing today. A supreme athlete, an awe inspiring back story and a true gentleman to boot. Social media would love him and I could see him strutting his stuff on Strictly.

Unfortunately Sully played in an era without smartphones, the internet and reality TV. In 1972 it was only newspapers and the BBC that carried news of his and his teams exploits home to jubilation in the north and apathy from the rest of the country. And so it has remained. Despite rugby league’s often bizarre expansion attempts.

The game enjoys excellent coverage on Sky but how many actually watch it? You can’t help but feel coverage of Super League on terrestrial TV would really build the game where it matters. In its northern heartland.

As an outsider looking in I have never understood the rugby league’s hierarchy’s obsession with expansion. They have ploughed money into experiment after experiment in trying to get the game established outside its natural border. Now Catalan are in Super League and Toronto in The Championship.

There is even talk of a club in New York. Fine. Yet all the while great old clubs like Batley, Dewsbury, Rochdale, Whitehaven and Workington, to name but five, are left to rot and wither on the vine. I just don’t get it. But, rant over. Back to the book.

The story of the 1972 World Cup is followed by an introduction and then a ‘setting the scene’ chapter. The chapter is a history of rugby league and how both Hull clubs were formed. I found this strange. I can only imagine the author was hoping non-rugby fans would buy the book and so would need orientating into this strange northern sport. I found it unnecessary.

You’re not going to buy a book about Alan Shearer and find a chapter about the history of football. And even if non-rugby fans buy the book a potted history of the game is unlikely to turn them into converts. They would be more interested in the man and his achievements rather than the nuances of the sport.

The bulk of the book is a season-by-season look at Clive’s career. Stories about Clive Sullivan and rugby league in general are provided by a host of former teammates and opponents. The season by season accounts will be mostly of interest to supporters of the two Hull clubs. For Rovers supporters the chapter looking at the 1980 Challenge Cup Final will be particularly sweet.

I really enjoyed the stories of Clive’s early career and the descriptions of rugby league in the 1960s. It was an incredibly brutal sport. The anecdote about already huge players strapping miniature cricket bats to their arms was hilarious. Though I doubt the recipients of a stiff armed tackle thought so.

What does come across in the book very well is Clive’s character. From the comments of his peers it is obvious that he was that rarity in sport. A true gentleman, a humble fellow who would go out of his way to help anyone. The author also manages to convey the steely determination of the man.

Sully must have had amazing will power. He fought back from so many bad injuries (including one as a child) that would have prevented most other men from playing sport never mind becoming one of the all-time greats.

The problem faced by the author throughout the book is the lack of anecdotes from Clive’s own lips. There seems to be very few written interviews, aside from a few newspaper reports, to reference and so there are no personal insights. As a biography the book doesn’t really get under the skin of Clive Sullivan.

There is little about Clive’s time in the army. This is such a shame. The book does include a photo of Clive and his army mates but nothing on how he coped in the forces. With institutional racism often in the news nowadays how did a black man cope in an elite unit like the Paratroop Regiment in the fifties?

Likewise his childhood is of course a mystery. But there are tantalising glimpses including a nugget about how Clive would run races against other children for cash prizes. I found this amazing but unfortunately without Clive’s personal memories the story couldn’t be developed.

A story that can’t be told

It is so sad that we will never know about Clive Sullivan’s career from his own lips. He had such an amazing story to tell about his journey from the backstreets of Cardiff to become a sporting idol in East Yorkshire. How he coped with being a black man making his way in professional sport in the sixties and seventies. How he found the courage and supreme willpower to return from so many injury setbacks. How he coped with the incredible demands placed on his body by such a physical sport. His relationship with supporters of both Hull clubs and how he really felt when he helped Rovers beat FC at Wembley.

It’s a tragedy he never got to tell those stories. But James Oddy’s book goes some way to filling in the gaps that exist in the written record of Clive’s career. And although it suffers badly from the lack of first-hand reminisces the author does a good job of painting a picture of rugby league throughout the duration of Sully’s career.

But unsurprisingly the most revealing insights into Clive Sullivan the man come from Rosalyn his widow. It was fascinating to learn that even this most elite of sportsmen would be literally sick with nerves before a game. Rosalyn also told personal stories of a mixed race marriage and how Clive coped with the fame and commitments that came with been a professional rugby league player and full-time worker.

Put True Professional on your bookshelf

A book for the rugby league fan. Hull FC supporters and to a lesser degree Hull KR fans will definitely enjoy the stories about their clubs.

You can find True Professional on Amazon or you can buy the book direct from Pitch Publishing. 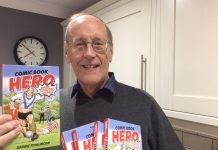 In conversion with Barrie Tomlinson