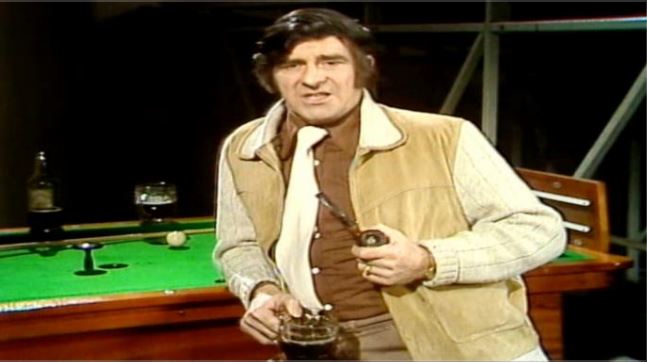 So there I was looking through the 742 Sky channels to watch on telly and coming up with zilch. And then I saw it. But I couldn’t believe what I was seeing. That’s Fred Truman. With his pipe. And a pint of Yorkshire bitter in his hand. Surely it isn’t? It can’t be. It is. It’s The Indoor League. Suddenly it was the seventies all over again.

The genius of seventies TV

Younger readers won’t remember this most bizarre of 1970s TV sports programmes. But The Indoor League was a huge hit up here in Yorkshire. The show featured traditional pub games including:

Cricket legend Fred Trueman hosted the half hour programme. His presenting style was different to say the least.

Only the pork scratchings were missing

Looking back it was all a little surreal. There was Fred pottering about in his cardigan puffing away on his pipe. And all the while supping on a pint while two bruisers tried to break each other’s arms. It was brilliant TV.

Fred’s supporting cast were the ‘sports’ men and women. The darts players, the skittlers and the arm wrestlers. They battled for decent prizes too.

There was of course the prestige of being crowned The Indoor league champion. But there was also cash on offer. The winner of each event pocketed £100. Not bad for the late seventies.

Darts – the jewel in Fred’s crown

Darts was the king of The Indoor League sports. Televised darts tournaments are now huge events of course. I like to think the programme gave it a push towards the popularity it now enjoys. Unfortunately the other sports didn’t prove to be TV winners. Barry Hern missed a trick by not glamorising shove ha’penny.

In the seventies the pub was still a social hub. Where men and women met to socialise, enjoy a bevvie and indulge in some friendly competition. A time when pub games involved skill. Potting a ball, throwing a dart or even shoving a penny.

Skills which have been lost and replaced by drinking shots, behaving like a pratt, and chucking up all over the place. Yes, younger generation I’m looking at you. Anyway, back to The Indoor League.

Yorkshire Television screened the first series in 1972. From the second series it was broadcast nationally. Much to the joy of the entire country. The Indoor League ran from 1972 to 1978.

It’s fair to say they don’t make programmes like The Indoor League anymore.

Maybe they should? But it wouldn’t be the same. An Oxbridge blue blood shipping chia tea would replace Fred. And what games would they feature?

I’m sure there are still some pubs where the locals gather for a game of dominoes but does anyone under 50 know what bar billiards is?

No, maybe The Indoor League is better off dead and buried. Remembered and celebrated only by grainy YouTube videos. After all there will never be another Fred Truman.

Do you remember The Indoor League? Let us know your memories of Fred and his bar skittles in the comments box below.