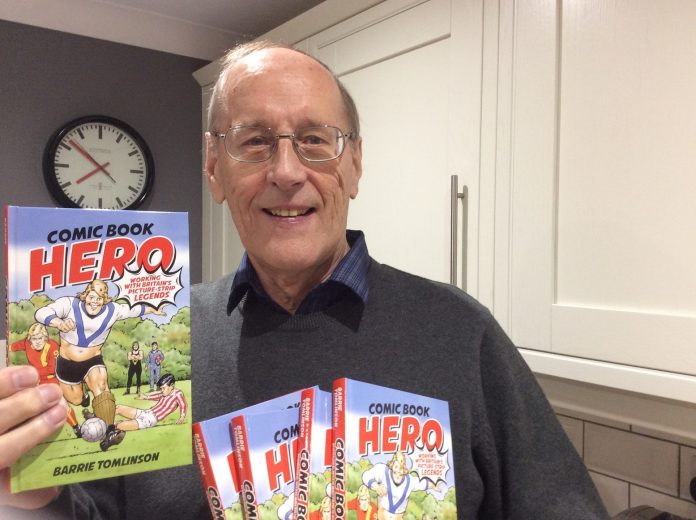 Who is Barrie Tomlinson? Editor of Tiger and Roy of the Rovers. Head of the Boys’ Sport and Adventure Department at IPC Magazines. Author of Real Roy of the Rovers Stuff and Comic Book Hero.

If you read a comic as a kid you will know Barrie Tomlinson and his work. From starting as a sub-editor on Lion he worked his way up to become editor of Tiger. He eventually became head of department and masterminded the launch of popular comics including Eagle, Scream, and Teenage Mutant Turtles. 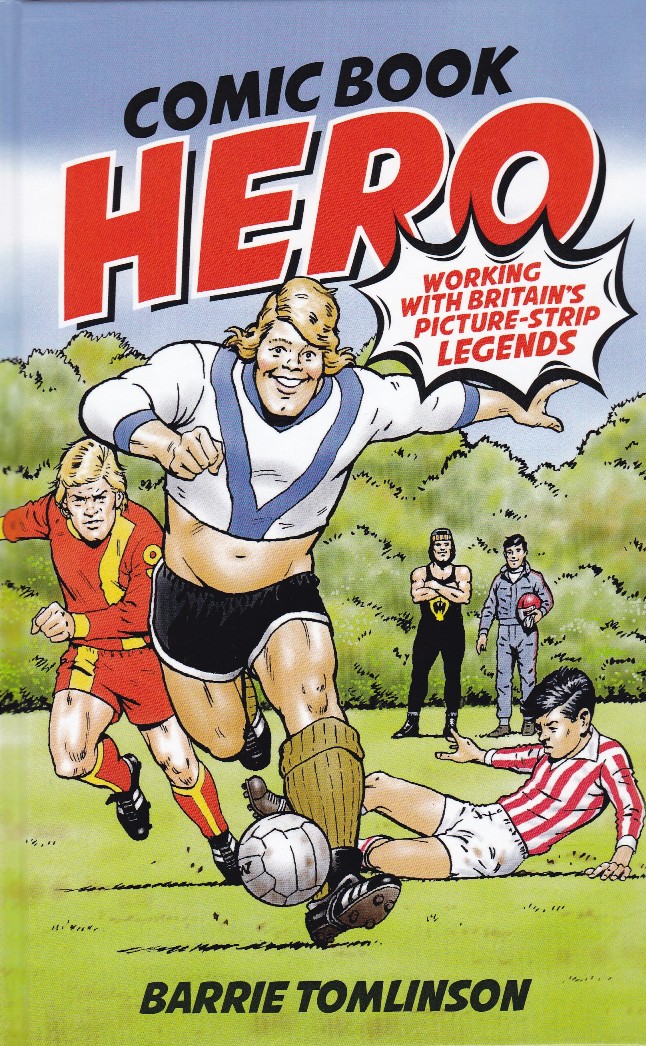 In his fifty year career Barrie saw the rise and fall of comics and worked with countless celebrities eager to be ‘in the papers.’ Those of us who read comics in the sixties, seventies, and eighties will remember a parade of famous names appearing in their weekly publication. And most of that was down to Barrie Tomlinson’s unique gift for generating publicity.

Barrie’s flair for PR was borne out of necessity. He said: “I asked management if my titles could be advertised. I was told there was no money for that so I decided to do my own advertising.

“Roy (Race) sent a couple of letters to newspapers and they got published. I then thought up the idea of asking the authors to write big events into the storylines and then publicising the events. The idea worked!”

Such was the popularity of comic characters like Roy Race their adventures often created stories in the press. But it wasn’t always their skill in sport or bravery in battle which made the headlines. But what was the biggest story? Barrie had no doubts. He said: “It wasn’t Roy getting married or becoming a father, Roy being shot, Sir Alf Ramsey taking over as manager or Geoffrey Boycott becoming chairman of Melchester. 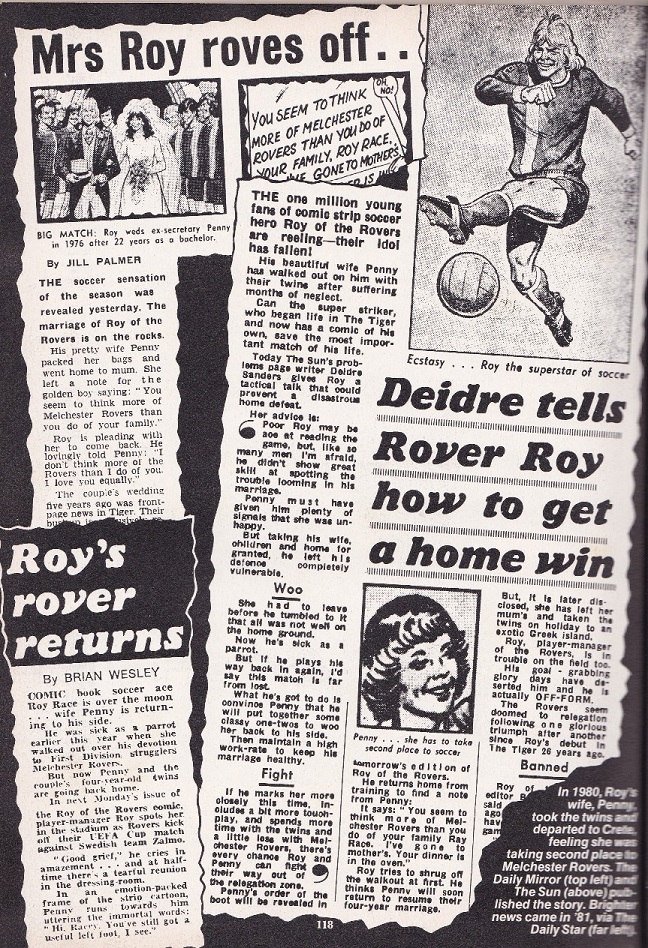 “Those events all got a lot of publicity but the biggest was when Roy’s wife, Penny, left him because he was spending too much time at the football club. The day that story appeared I was interviewed on ITN and on BBC TV. The newspapers were full of the news. Everyone wanted to talk about it.”

Getting people talking was Barrie’s speciality. Generating PR through events like Tiger Sports Star of the Year (first winner Ann Jones), events such as the launch party of Eagle with Dan Dare fighting The Mekon and photo opps by the dozen. Getting Lillie and Thomson dressed as Santa is just an example of the sports stars and personalities eager to appear in comics.

But who was the biggest celeb Barrie persuaded to appear in his comics? “I asked Prince Philip if he would write for the first issue of Roy of the Rovers and he agreed. That was something of a scoop for children’s comics. 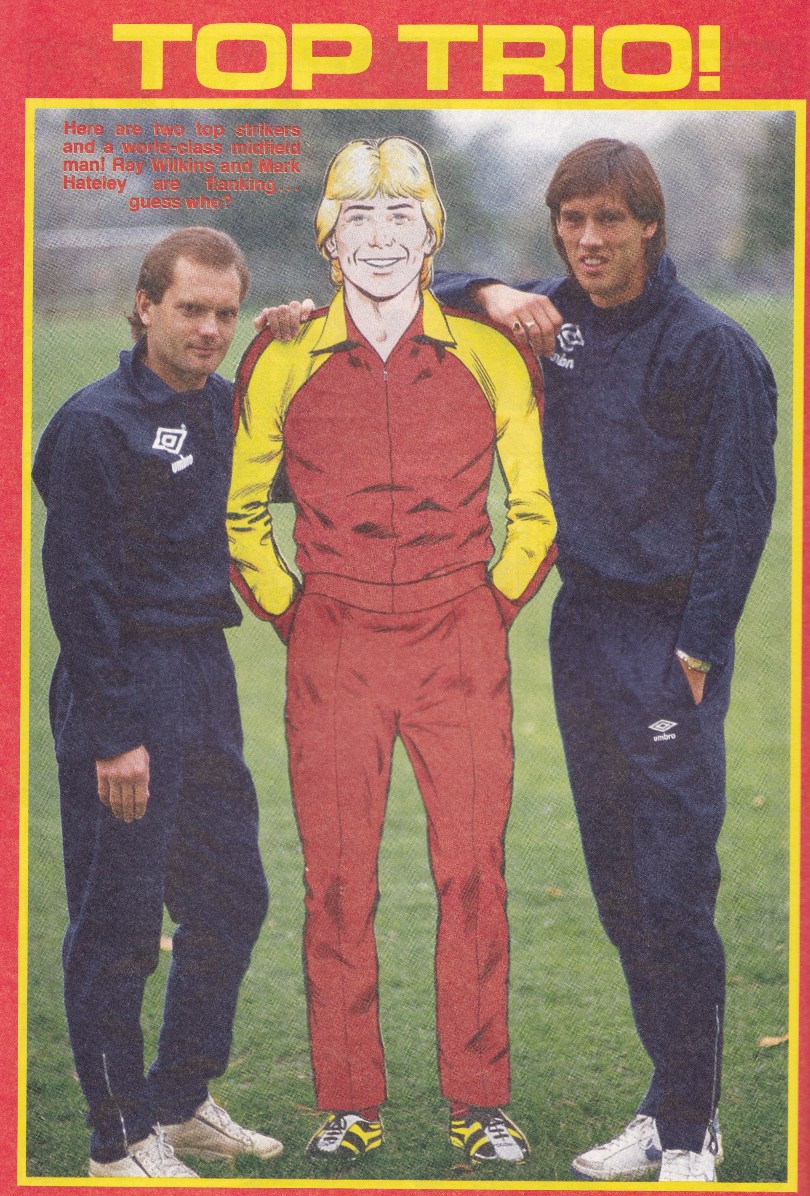 “Other big names I have enjoyed working with include Geoffrey Boycott, Sir Alf Ramsey, Trevor Francis, Malcolm Macdonald, Dickie Bird and Morecambe and Wise…plus many others.”

As much as celebrity endorsement helped PR it was ultimately the stories and characters which drove comic sales. As readers we all had our favourites. But who were the characters which Barrie Tomlinson was most fond? “Roy Race of course,” he said. “And Dan Dare (which I had read as a boy, in the original Eagle). 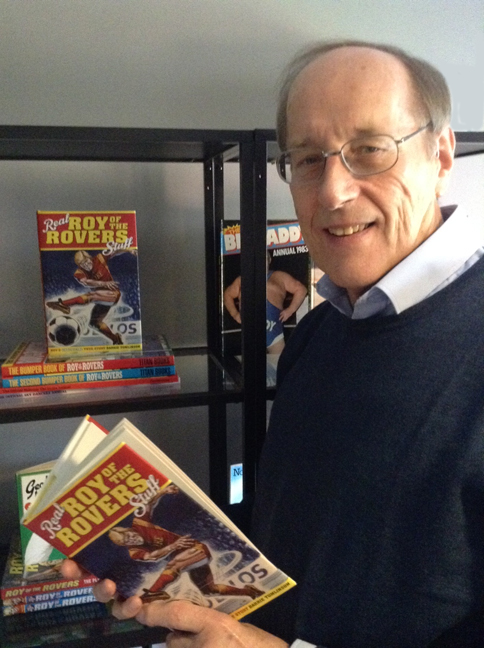 “I very much enjoyed creating and writing stories such as The Hard Man and Death Wish. I also wrote many adventures featuring Johnny Cougar the wrestler. In the Hard Man story I enjoyed creating the offbeat football manager Viktor Boskovic. The artwork by Doug Maxted really brought him to life. 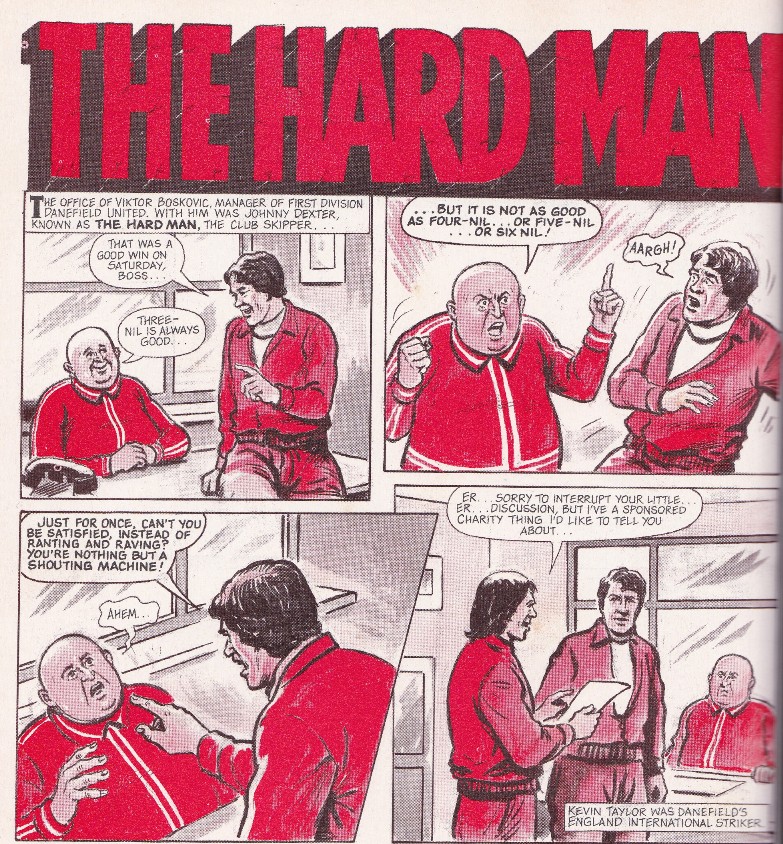 “Scorer was also a big favourite. I wrote over 6,000 episodes. The three artists who worked on the story added greatly to its success: Barrie Mitchell, John Gillatt and David Sque.”

Scorer was a phenomenon. The football strip ran for a staggering 22 years in the Daily Mirror. In that time it developed from a football story into a kind of sporting soap opera.

Barrie wrote every episode. But where on earth did the inspiration for those thousands of episodes come from? “The ideas just seemed to flow. It was a long running story, six days a week for 22 years. It started as a single strip, then a double strip, then a triple. 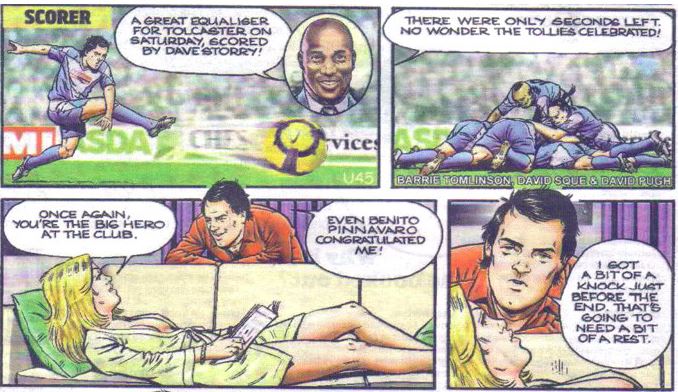 “It was fun having a character who could perform well on the football pitch and also have an off-the-field life. His girlfriends started to dominate the story, particularly Ulrika, who became very popular.

“In the end, I was running two fan clubs. One for Dave Storry the hero and one for Ulrika.

“It had lots of good football action and pretty girls. It was a winning combination!”

One of Barrie’s comics which still has an active fan base is Scream. First published in 1984 the horror comic was a huge departure from Roy of the Rovers and other ‘family’ comics of the time. Scream only ran for 31 issues but has become something of a cult classic.

For Barrie Tomlinson working on Scream must have been very different from the norm. “Yes, it was,” he said. “Previously I had edited comics which were very much a parent buy.

“Scream was different. I had to balance the content so the stories were very strong but not too strong, so no-one could be offended. I worked out the storylines and I think I got the balance right.

“In the end, it was not the readers who complained, it was the management. It was killed off far too early.

“It’s great that so many people still remember the title and stories from it are now being reprinted.”

Heroes in a half shell

By the late 1980s the popularity of comics was waning. But in 1990 Barrie launched a British version of Teenage Mutant Ninja Turtles. It ran for three years and bucked the trend of falling comic sales. TMNT was a comic Barrie was proud of. “I was delighted with that success,” he said.

“We achieved a very big circulation doing a British version of the comic. That was at a time when most circulations were falling.”

In 1988 Barrie had left IPC to set up his own company whilst still keeping editorial control of his comics. After initial success, a new management team took the titles back, to be published in-house. Something which clearly rankled. “It was very frustrating,” said Barrie. “I thought my editorial company would operate for many years but that wasn’t to be. I should have insisted on a contract!”

After comics Barrie went on to edit other magazines and newspaper strips including Scorer. There have also been television appearances but Barrie has continued to edit and write. He takes up the story, “For a couple of years I edited our local village magazine. I was the only editorial person working on the title.

“Fortunately, I kept lots of photographs from my career and both books are full of photos of the stars who became involved with my titles.” 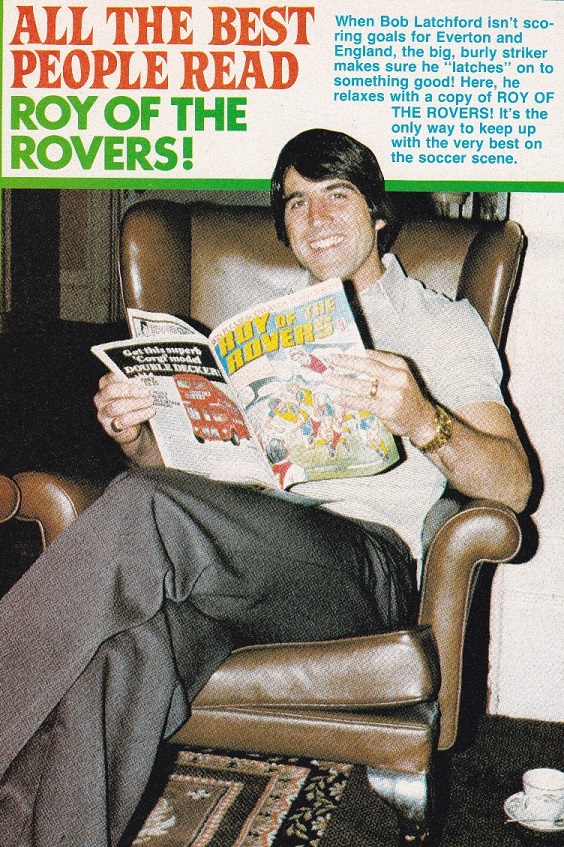 Turning back the clock?

As we get older we are often accused of starry eyed nostalgia. Of thinking everything was better back in the day. That isn’t true. Time and progress marches on. We all know that.

But there are some things which have changed for the worse. Kids not reading comics is one. I think many of us would agree with Barrie when he says, “Comics were a good thing to have. They encouraged children to read and we got lots of support from teachers and parents.

“I am sure that one day comics will make a big comeback and they will regain their place in the lives of a new generation of children. There will be a lot of dads who support the idea!”

and Real Roy of the Rovers Stuff! 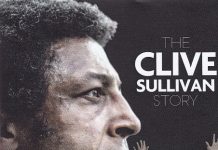